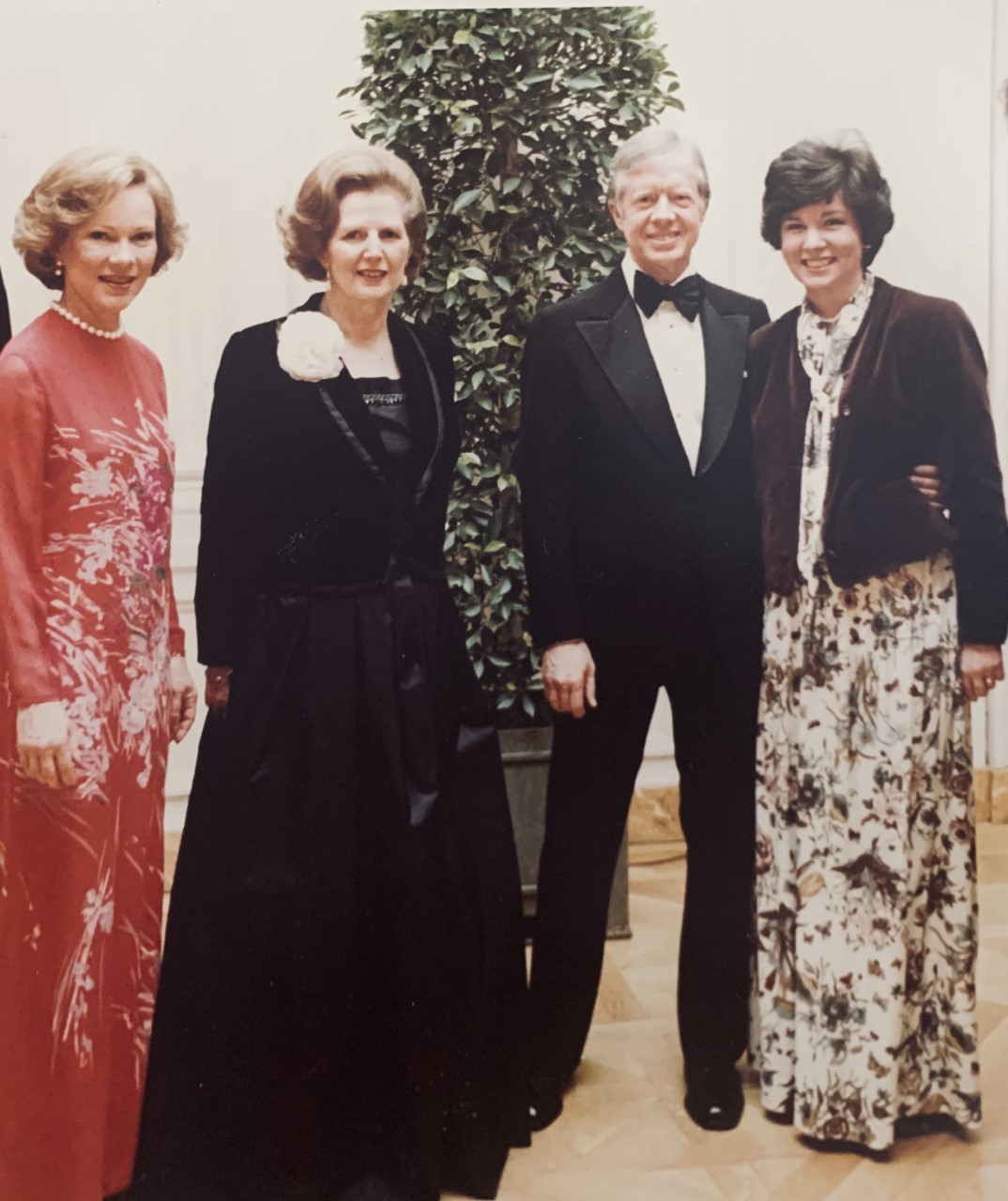 As Kit Dobelle sees news during the early days of President Joe Biden’s term, the Pittsfield resident will notice people we do not see, recognize customs we do not know are being followed. She will look back at 1977, when she and her husband Evan walked into the White House, shortly after Jimmy Carter’s inauguration. They both served as Chief of Protocol.

Kit was 32 years old when she found herself on the world’s political stage. She was there when the U.S. was normalizing relations with China and during the Camp David Accords.

“I was grateful to have a front row in history,” she said.

You might say it started with a casual remark at a party.

Kit grew up in Hampden, Conn. (then the former Edith Huntington Jones), on a piece of land gardened to be more natural than her conservationist father found it. After graduating from Colby Junior College, she worked at First National Bank of Boston.

“I told someone at a cocktail party that the one thing I’d always wanted to do was work in politics. I don’t know who he was or why I said it, but he said, ‘Well, if you’re serious, we’re helping somebody in a special election for state representative.’ Once you’ve said that’s the thing you’ve always wanted to do, it’s hard to say, ‘Well, I’m busy.’” She worked on Maurice Frye’s campaign. “He was successful. Helping in that campaign, I met my husband, Evan Dobelle,” she said.

The young couple seemed to draw a double helix with their careers. He worked on Ed Brooke’s senatorial campaign, she on Governor John Volpe’s; they both worked in Volpe’s office. She went to the University of Massachusetts, and later he did graduate work there. They married in 1970.

They had worked in Washington, California and Boston, when they decided to move to Pittsfield. Evan had grown up there and in Florida. He ran for mayor and won.

“After Carter’s talk at the Pittsfield Hilton,” Kit said, “we were both really taken by what he said.” They were Republicans, but not for long.

They threw their support behind Carter. They were in New Hampshire when their candidate “went from ‘Jimmy Who’ to the frontrunner.”

Kit worked on his campaign in Maryland and Pennsylvania. Evan worked on convention arrangements in New York. There, Kit worked in the Carter suite. “One morning, heads of all of the labor unions came for coffee. All the candidates for vice president came.”

Kit accompanied the Carter’s daughter-in-law, Caron Carter, on the campaign trail. Ms. Carter was pregnant, and as per doctor’s orders, not allowed to campaign alone. From Labor Day to Election Day, Kit accompanied her to medium-sized cities.

“The campaign had very few resources, and it was the policy that everybody, even Governor Carter and Rosalynn, stayed in private homes. My job was to make sure Caron got sleep and ate well.”

And so, on election night, Kit and Evan were with the Carter family in Atlanta, Ga., when the results came in.

The next day, Evan was offered the job of chief of protocol. President Carter then met with the couple and said he considered it a job for two people. “The President, Rosalynn and Evan all very much encouraged my participation.”

The chief is involved in the international trips of the president and first lady, traveling ahead of the trip and working out the arrangements of the schedule.

“Because Evan had been mayor, I kind of thought he was the mayor of the diplomatic community.” He attended as many as five receptions in one night, going in one door, taking a nonalcoholic beverage, saying hello to a few people, then out another door, and on to the next one.

Some practical details, such as where people sit during official ceremonies, are addressed in the Order of Precedence, created in 1908, “as a means of settling a history of embarrassment, confusion and the miscommunication amongst officials invited to events at the White House,” according to the May 14, 2020, version of the document. Kit noted it is continually updated.

The job requires knowledge of precedence, and a fair amount of instinct. Kit calls it common sense. Eventually, it becomes skill.

ON HER OWN AS CHIEF

When President Carter asked Evan to work as treasurer for the Democratic Party, Kit took over the Office of Protocol.

She was chief when Deng Xiaoping came to normalize relations between China and America. She met the leader in Alaska, and then flew back with him to Washington, and on to Atlanta, Houston and the West Coast.

“In Houston, he went to a rodeo, and the hosts wanted to present him with a 10-gallon hat. I explained to him that he would be given the hat and the opportunity to ride in a stagecoach. When he was presented with the hat, he put it on right away with a big smile and marched out and got into the stagecoach. He waved the hat out of the window.

“I think that picture made Americans comfortable with him. There’d been a huge thing about ‘would people be comfortable with the head of Red China, Communist China?’ but his being so natural in those situations made a huge difference. I was happy that I could tell him ahead of time, because so often, people present you with things you’re not expecting.

In setting it up, everything was considered. “Prime Minister Begin was kosher. President Sadat had spent time in prison, and he had digestive difficulties because of his life experience. The head of the food office suggested that we just do everything kosher.”

But Kit realized if the Egyptians learned meals were planned around kosher food, “they would be upset that we were favoring the Israelis and they might leave.”

After Camp David, negotiations continued, with traveling back and forth.

Kit played a role in the diplomatic process, but was unaware of it at the time.

“During one of Prime Minister Begin’s visits, he and his wife were invited for dinner with the Carters, so I escorted them to the White House, and then I waited. Mrs. Begin left early in the evening, so I took her back to Blair House.

Then, I went back to sit in the White House to wait for Prime Minister Begin. I saw that as my role.

“I’d had a request from one of the negotiators in our State Department to ask when the next negotiation session would be held, so that they could plan for it. If I could find that out, that would be very helpful.

“When I escorted Prime Minister Begin back to Blair House, I asked him.

There’s no more negotiation. We’re done.’” Kit conveyed what she had learned to the negotiators, who in turn spent the night coming up with something to present to Begin the next morning to keep the talks going.

“There were a whole new set of protocols [Kit] had to write,” Alter said of her role in the talks that weathered several impasses. “Kit Dobelle had to be inventive and sensitive.”

In September, 1979, Rosalynn Carter asked Kit to be her chief of staff. Earlier, Kit had advanced and accompanied her to seven Latin American countries.

As her chief of staff, Kit was in Thailand with Mrs. Carter when the American hostages were taken in Iran.

“I learned how many people in very critical positions are career people in the White House and in the State Department. They are totally loyal to the presidency. The woman who sat outside the Oval Office has been doing that since the Eisenhower administration.

These people made it so much more comfortable and feasible to do the role.”

People were often surprised when they met with the president, she said.

“I would be in the car when they came out of the meeting with President Carter. The international press had talked about a peanut farmer — somebody who wasn’t experienced in Washington…. President Carter was an engineer by training. That’s his style, and he’s extraordinarily well read and would have really studied all of the papers that would be presented to him prior to the discussions.”

When Carter lost his bid for re-election, Kit was with the family when they hosted the Reagans at the White House.

In the Spring of 1981, she and Evan went on to other adventures, including presidencies of universities. Early on, they returned to Pittsfield, where they bought a house.

One day, while mowing their two acres on a tractor, Kit said her husband came running out saying she had a call from journalist Roger Mudd.

“He was calling because the chief of protocol had curtsied to — I think it was Prince Charles. He wanted my opinion. As Americans, we don’t curtsy to foreign royalty, but I chose not to comment. So, then I could go back and get on the tractor and keep mowing the lawn.”

Shortly before the 2021 inauguration, she said, “Without the kind of experience Joe Biden has, things could be so difficult. They will have to focus on specific things. They must get the virus under control, and the economic situation. He is hiring people who know the White House, know the various agencies, who know how to walk in on day one. They can function immediately.”

…………………….
This interview was conducted as a part of an Osher Lifelong Learning Institute oral history project in collaboration with the Housatonic Heritage Oral History Center at Berkshire Community College. A podcast of this interview is posted on the Eagle and OHC sites and the entire interview will be placed online with the University of Massachusetts Libraries Special Collections. This article is one in a series about people and their work.