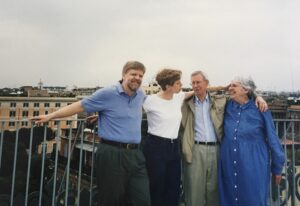 Recalling, and healing from, the memories of war

It may be that making raspberry shrug from backyard berries and drinking it down on a hot summer day; or writing poems; or even revisiting the sites of memory with loved ones helps with healing.

Whatever the consolations, World War II veteran Dave Resnik, of Stockbridge, at 100 years old, retains some vivid memories of war and of healing, too. We interviewed him twice, once in 2016, and then in May, 2021. Over the years, he lent books, shared maps and told us his story.

“It was quite a war,” Resnik said to then Berkshire Community College student, David Wasielewski, in 2016. It was a war of foxholes and trench foot; a cold, wet winter, including one battle that nearly resulted in retreat back to the sea; searching for mines, removing boxes of TNT left beneath bridges or in piles of downed trees across roadways. As part of the 36th Engineer Combat Regiment, Resnik participated in five landings: in North Africa, Italy, and France. Near Anzio, Italy, the second of the two Italian landings, the Combat Engineers were often on the line as infantry, once for 47 straight days. The Imperial War Museum estimates the invading forces at Anzio sustained 29,200 combat casualties — 4,400 dead, 18,000 wounded and 6,800 missing or captured.

It was quite a war, all right.

David Resnik was born in England. At 11 years old, his family moved from Liverpool to New York, and then to Ramsey, N.J.

“They couldn’t understand me,” Resnik said, referring to his accent and his classmates. After high school, he went to work on a turret lathe in a nearby machine shop. Because it was war-related work, he might have been exempt from military service, but he enlisted.

“I believed in the war,” he said. “My cousins lived in England and we got news about Hitler from them. England was being bombed.”

He could have enlisted in either army, but chose the American, with advice from his father, who had fought in World War I. Equipment and food would be better, his father said. After training, Resnik shipped out, first to Algiers, North Africa, (where he contracted malaria and became a U.S. citizen), and then to southern Italy.

The first landing near Salerno, Italy, happened the day after the Italian armistice. Soldiers on his ship made bets on what an armistice would mean on the ground. They soon learned: Germans occupied much of the country. From Beachhead News: “The roads were literally lousy with mines: Paestum, Battipaglia and Eboli were rubble heaps that had to be cleared, and there were more blown bridges than Heinz has pickles.” Movement up the peninsula was slow.

“You have never seen as devastated a city,” Resnik said of Naples. “Germans left a lot of delayed action mines; one in the post office went off a week later. Everything was booby-trapped. The harbor was full of sunken ships.” Resnik’s group was soon making its way to Rome. And then, they were off to their next landing, in southern France.

After the war, his sister encouraged him to go to Black Mountain College, in North Carolina, paid for by the G.I. Bill. It was a lively, experimental place. Best of all, at Black Mountain, Resnik met his future wife, Elizabeth Gelhorn. The natural beauty and creative atmosphere were healing. “I used it to recover from the war.”

Later, he finished his degree at the New School for Social Research in New York, while working in a retail clothing shop, and then went to work with veterans at the NYC Welfare Department. The family — now with three children — moved to the Berkshires for his job at the Berkshire Farm Center and Services for Youth, in Canaan, N.Y.

His employer supported his master of social work degree studies. His mentor at Berkshire Farm also talked with Resnik about the war. It was important to be in an environment in which healing was the goal. In fact, he introduced an approach called milieu therapy, in which all parts of the boys’ lives were part of the treatment.

Trying to survive for so long makes a soldier angry and upset, he said. Many years later, on vacation at Cape Cod, when a plane passed overhead, he fell flat to the sand. It took time and much effort to heal.

Then, in 2000, he took a trip to Italy, this time with his family, including one granddaughter.

From Liz Resnik’s holiday letter that year: “We toured the shorelines of the Second World War, touched memorials, scanned signs establishing the route of battle, became reflective in the Anzio museum that contains relics of the war, a conspicuous past for Dave … We walked on either side of time.”

In Paestum, Dave Resnik saw the “beaches filled with bathers and children.” The image did not fit, he said, so “I turned around, looked at the mountains and the Greek ruins and I knew it was the right beach.” At the Anzio Beachhead Museum, a man shook his hand and said he had helped the Allies. He remembered partisans helping as interpreters and with reading maps.

Writing, he said, helped him take control of life. He writes poetry, and also wrote a book, “War Days: Melancholy Lessons toward Living.”

The act of interviewing a veteran for his wartime story comes with responsibility. Locally, Paul O’Brien has engaged many students at Mount Everett Regional High School in interviews with veterans. Those interviews become part of Veterans Project of the U.S. Library of Congress. David Resnik’s interview 2016 was sent there, and O’Brien advised the BCC student interviewer on Library of Congress protocols.

Owen Rogers, liaison specialist there, said, in an email: “Interviewers conduct the background research that shapes their interview questions, and also ask if there are prohibited questions or areas that may make the interviewee feel unsafe.”

He added: “We recommend that interviewers record the narrator’s story in an environment where they feel safe. This can be their favorite chair in the living room. Before the recording begins, establish a visual cue that indicates that the veteran is uncomfortable and would like to stop the recording.

“For every recording, please bring water and tissues to help the narrator through uncomfortable moments.”

One of those interviewed by O’Brien’s students is Alan Romeo, of Sheffield. A Vietnam veteran, he said it is comforting when an interviewer has done research and can ask relevant questions.

Romeo’s own healing included therapy. His wife is a professional singer and he is good at organizing events, and so they put on shows and donate the proceeds to veterans. He is on the Sheffield Historical Society board and mounted an exhibit about his experiences.

“Moving here [to Sheffield] saved me,” he said.

After Vietnam, he had returned to eastern Long Island, but suffered acutely from post-traumatic stress, always looking out the window for the enemy. He and his family moved to Sheffield 10 years ago, and there they met O’Brien. “I went to my first Memorial Day parade. It was a blessing. The whole town went there. I was in tears. This whole community cares about veterans.”

Dave Resnik spent his 100th birthday with his daughter, Kim, and her husband, Jeff Gerth, with whom he now lives. He lost his wife in 2008, and lost two children before her death and one since.

Kim helped her father with both recent interviews, supplying some missing pieces, encouragement and support.

She recently arranged for birthday cards to come from friends and family, and as they arrived, he opened them, stretching the 100th birthday into many days. Kim was the one who reminded him of that raspberry shrug — “such an old-fashioned drink” — and picking highbush blueberries in Great Barrington. Such care may be the greatest consolation.

Judith Monachina is the director of the Housatonic Heritage Oral History Center at Berkshire Community College. This interview was conducted under the auspices of the center, at Community Television for the Southern Berkshires, in Lee.